Director of Operations Bill Mannewitz, PT made a move recently—he left Omaha in August and moved his family to Spokane, Washington. That’s a major move in anyone’s eyes but a move toward progression for RehabVisions.

During the height of the pandemic, we reorganized our entire Operations team to provide the most comprehensive management to all our locations. This included Bill Mannewitz’s promotion to Hospital Director of Operations in Washington, Texas, New Mexico and part of Kansas. Along with this reorganization, we quickly implemented technology for working remotely. This allowed our Home Office team to work closely with our therapy teams out in the field when travel wasn’t recommended, and visitors were not allowed in our facilities. It also provided an opportunity for daily meetings when meeting in person was not advisable.

When travel became reasonable again, Bill again started planning trips to his locations. “As I was booking travel for back-to-back weeks, I thought ‘this is silly.’” To make the travel work, he had to be gone for a full week to see all his locations in Washington. It wasn’t convenient or cost-effective for the company. The other Directors of Operations have at least some locations within a drivable distance.

After discussing with his wife Mandy, Bill pitched the idea of moving to Washington to Chief Operating Officer Rick Larmore. Bill said they discussed the benefits of being geographically closer to some of his contracts to reduce travel costs, increase management visibility and support as well as a focus on growth in the region. “On one hand I hated to lose Bill from the Home Office because he brings such positive energy but on the other, I believed this move could open up opportunities for other leaders in our organization,” Rick said. He discussed it with the Executive Team, and they agreed.

Human Resources Vice President David Mahoney said Bill’s move illustrates RehabVisions using technology to promote opportunity for employees all over our company. “It becomes less about where you are and more about the talents you bring to the organization,” he said.

And yes, Bill misses the Home Office but has two set Zoom calls per week and plans to travel back occasionally for in-person meetings and to visit friends. “We wish Bill luck in this new venture,” Rick said. “And we look forward to seeing how this change positively affects others in our organization.” 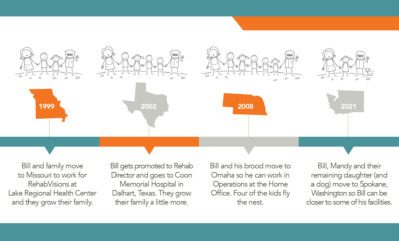