An estimated one million Americans live with Parkinson’s Disease (PD) and around 60,000 new cases are diagnosed each year. There is no cure for the progressive disease. Many physical therapists and occupational therapists are learning a newer exercise-based behavioral treatment technique, called LSVT BIG, that patients with a PD diagnosis can continue to practice after completing the initial program.

“When you get Parkinson’s, you do everything smaller, and your actions continue to get smaller and smaller. The size of everything you do changes,” says Holly Sabourin, PT.

A 17-year RehabVisions veteran and one of only 1,600 PTs and OTs worldwide who are certified in LSVT BIG, Holly has been treating her patients with the new technique for the past nine months. News of the certification was well-received by neurologists in the surrounding community and the local Parkinson’s group. Former patients who had previously heard of LSVT BIG became word-of-mouth referrers within the PD group and local retirement communities. 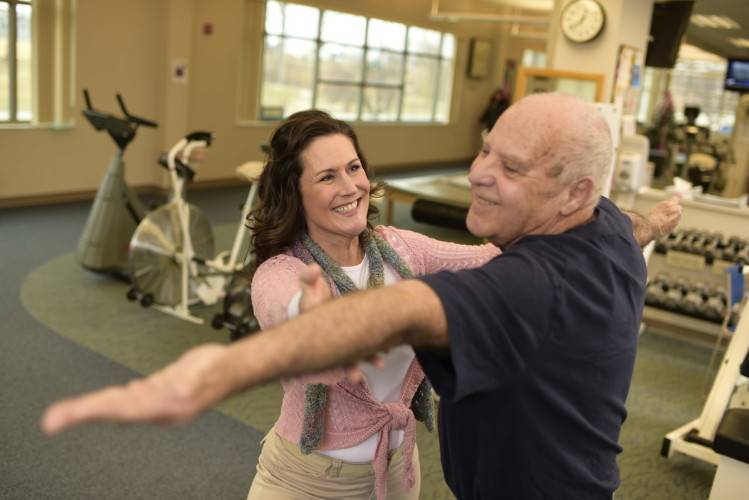 The program consists of 16 one-hour sessions, to be completed over four consecutive days a week for four weeks, plus homework exercises. It is an intense regimen for both patient and therapist. It can be exhausting on both sides, especially when a therapist treats back-to-back patients with a PD diagnosis.

“You’re having them work at a super-high intensity, around a 7 or 8 out of 10,” says Holly. And the therapist movements are even larger and more exaggerated.

Bradykinesia, hypokinesia, postural instability and a slew of other motor symptoms can occur in people living with PD. Therapists hope to affect all of those areas with LSVT BIG exercises by focusing on the intensity and amplitude of movement. Over the four weeks, as the patient mirrors the exaggerated movements of the PT or OT, they normalize the size of their own movements during functional daily activities and even walking, by practicing it “BIG”.

At the end of four weeks the patient is prepared to continue doing their exercises at home three to five times a week. The exercises continue to slow progression of the disease and keeps them more functional in their daily lives.

Physical therapists, occupational therapists, PTAs, COTAs and currently enrolled PT and OT students (great on the resume!) can be certified in LSVT BIG. One suggestion Holly has nine months after certification, “have someone nearby who is certified, to ease the burden.” Her nearby support is Laurie Carson, PT.

Laurie says she has also benefited from having another certified therapist in the vicinity. Mostly, she enjoys talking about how remarkable the treatment truly is for her patients.

“I think the neat thing about LSVT BIG is that within a four-week time frame you get to see a big improvement. Often the patients we work with have improvements that are more gradual. This program is rapid progress, and it’s fun to see improvement on almost a daily basis,” says Laurie.

Learn more about LSVT BIG on the LSVT Global website.